Such a short distance – 80 km from Białystok to Łomża. Driving didn’t seem so short. Actually it was our error. Someone read 30 instead of 80, so the half hour drive to the archives was much longer than half an hour.  The directions were pretty clear, but the archives themselves weren’t on the main street on which we thought we would find them, but off an alley and parking lot!  The inauspicious looking building held a wealth of treasures.

Our original plan was for some of us to stay doing research in the archives while the rest went off to a church repository.  Instead we all jumped into the records which the archivist kept bringing to us. She, like all the archivists we have met on this trip was wonderful and gracious and eager to help.

The room we were in was small and we took it over.

As in our previous stops in Warsaw, Kaunas, Vilnius, and Suwałki we quickly became immersed in the task at hand, and the room was quiet except for an occasional gleeful comment when one of us located a name for which we were searching. Hours passed.

The pages were so fragile and yet had lasted so long. The writing, much of which was still very clear after 200 years. Page after page – the books I was looking was arranged by family, and I was amazed to see the same names in different languages – Russian, Polish and Hebrew. I watched the changes that took place as the names were written in the different languages as they morphed from one spelling to another, maintaining the same sounds but could clearly visualize how the sounds changed at a point in time. The Russian Лев when written in Polish became Lew – if the spelling remained the same on arrival in the US, the pronunciation would have now changed!

Marek and I left the others in the archives to finish up and walked about 15 minutes to the cathedral where the diocese records would be kept. We briefly met with a priest and a secretary, both of whom were eager to help, and we soon found ourselves digging into beautiful books. The paper was think, hand made and very durable and it was explained that the paper was such that it wouldn’t get ruined when wet. The ink was still dark enough to read, some pages looked like they had been written yesterday.  The handwriting was clear. The records we were looking at were all in Latin, and these were marriage records. Marek gave me clues to look for to find the names – “inter” would be followed by the name of the groom, then his parents, the next clue was “et” – and following which would be the name of the bride. 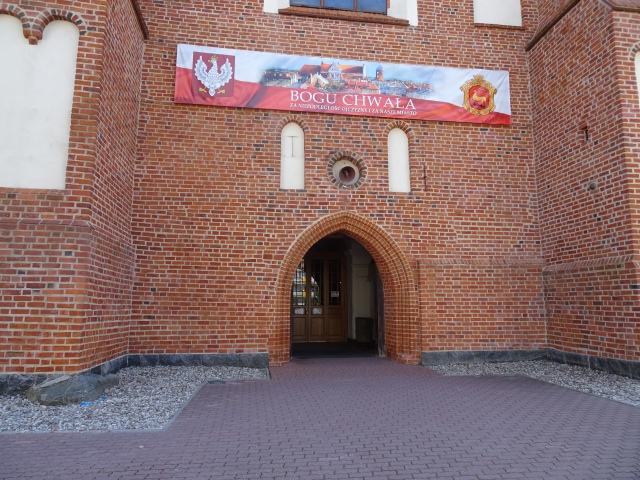 The cathedral office closed and we went back to the archives to meet up with the rest of the group and continue on to the next stop: cemeteries and parish churches. The priest at the diocese told Marek that the parish priest had some records we’d be interested in – conscription lists. It was unclear to anyone why the parish priest would have those, but they were of interest to us in locating an ancestral family, so off we went. When we arrived at the church, it was clear that some celebration was about to happen. The priest at first did not admit to having the records, until Marek let him know that the diocese said he did.  Because the celebration (a 50th anniversary) was about to begin, we were asked to return in half an hour. That, we thought, would give us time to find the cemetery in Wincenta, but driving up and down country roads did not yield the results we had hoped for, and then it was time to return to the church.

I just realized, as I was writing this, that although the photos I have been taking are all of old buildings, we are also passing some wonderful looking new houses. They are just not what I am interested in and I search out these older structures to photograph. Most of my pictures are being taken as we are speeding by in the van. Lindsay, who is sitting behind me, has been great about getting blasted by wind every few minutes as I lower the window to take yet another photo!

We returned to Białystok where there was a very important commemorative exhibit in place from 16 – 19 August – this marked the 75 anniversary of the Białystok ghetto uprising. Our hotel is on a huge pedestrian mall with restaurants and shops. The exhibit was places on one side of the mall by the main pedestrian and vehicular thoroughfare. Across the street was the Białystok archives and the exhibit continued there. I was pleased to see people stopping to read the information about the ghetto and the uprising, and even on boards set asid for that purpose, to sign their names. The name of the exhibit is Białystok Remembers.

We should all remember.