I’m going to have to get back to Salt Lake City to add photos in order to describe what we saw in these very different towns. The buildings in these, as all over small towns in Lithuania that date back to post-war times are relatively few.  Lithuanian towns were devastated in two wars are were on the front lines with German and Russian troops battling for this relatively small country.

I’ve been capturing images primarily of the houses that remain, but also quite a few of the white brick Soviet era buildings.  Red brick are often older, and the time in which the wood frame homes were built are almost impossible to identify unless there are maps with buildings from different time periods. Some which may appear quite old, are less than 50 years old, others may be hundreds of years old.  Often, we see wooden homes that appear to be falling apart, but the crisp white lace curtains ont he windows tell a different story.

The most notable excursions today, were in a park in Kelme and a walk through Tauragė, both to find cemeteries.  As we drove through Kelmė, we saw a marker to a Jewish cemetery. We turned down a road which was part of a park, and parked the car.  Lina and I walked to the end of the park without finding what we were looking for, so headed back, and turned down a dirt path. All we could see at the end was a bridge, but we met a man on the path and asked him and he gave us directions.  The cemetery is huge. A fence runs around it, and the gate was open so we could walk through.  It was clear that someone was taking care of it – the grass had been mowed recently, although the cuttings were laying drying, and tree branches had recently been clipped, they too were laying on the ground – my assumption was that someone would be back to clean it up.  We spent some time wandering through the stones, marveling at the condition of them – some very badly disintegrating, and others looking like it was only yesterday that the stone was erected. 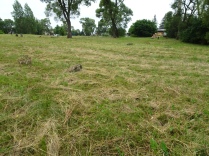 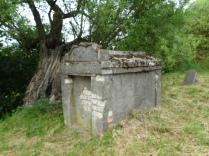 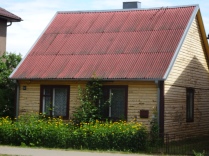 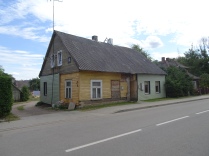 In Tauragė we searched, walking up and down streets, and finally driving, before we found the lone marker commemorating a cemetery that was no more.  Was it originally just on the empty land on which the marker stood or did it also occupy the land on which relatively new homes stood? Was the land unrecognizable as a cemetery when the homes were built or did the cemetery suffer further destruction at the hands of those who wanted to build there?

In Raseiny I asked Lina, the historian (not Lina the genealogist) who showed the remains of one gravestone which was recently found, if she thought the rest of the stones had been used for road filling and for fences and other building material. She indicated that this was probably the case. Was this also the case in Tauragė?

In Ariogala, we didn’t find anything which would indicate that there was once a thriving Jewish community here.  I feel so much like I’m repeating myself over and over.  There were certainly houses that may have pre-dated WWII and in which there may have been Jewish families living, or shops catering to the Jewish community, but now, there is no indication that there was. 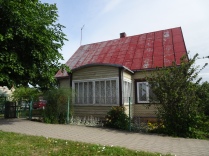