Posted on January 1, 2017 by Janette Silverman

The 2016 IAJGS Seattle conference is but a fond memory, and now it’s time to get to those things which took a back seat to conference planning.

For the last six weeks I have been attending to tasks that I have threatened to start, but in moments of sanity (or laziness) have avoided. Our garage had become a warren of cardboard boxes, mostly empty because you can absolutely never tell when you will need one – so I tasked myself with tackling them all, getting shelves in the garage and getting organized. As of this morning, that is completed.

I am still in the midst of re-organizing a closet in our study. I think the last time anything was taken out of that closet was over a decade ago.  Although the stacks of things (lots of empty boxes) have not fallen down or even threatened to, they did need to be taken apart.  We have filled the car with trash to take to the dump twice (in addition to filling to overflow our garbage and recycling bins twice).

In the midst of all of this, time had to be taken to scan photos which should have been scanned years ago.  There are probably hundreds if not thousands that need to be done. Most, thankfully, had some identifying labels but some had no label.  Others had labels,but aside from the names of the people in the photos, I don’t know anything about them. I wish I did.  My great-grandfather was Simche Moldawsky. The woman alone was his sister, Malke. The couple were his brother and sister-in-law – Moshe and Sura. I know my grandfather was born in Zhitomir, Russia – I have his birth record. I know that his mother’s family was from there, but that his father’s family was probably from a distant place. I have no idea where.  Ah, so back to the 2017 resolve – this year I pledge (and I hope I can do it) to write a blog post at least once a week, and discuss the brick walls I encounter,. some of my successes and some tips I pick up along the way! 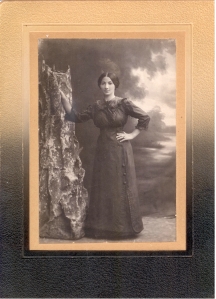