Posted on January 9, 2017 by Janette Silverman

We often consider the names our ancestors adopted after they arrived in the US, and try to figure out what names they might have used in Europe. There are myriad reasons for a person changing her name(s). One of my relatives I think went about a name change very creatively.

My aunt Ethel who died in 2004 just short of her 101st birthday was an amazing woman. She nursed her mother through her last illness, and then did the same a few short years later for her husband. For fifty years she lived alone. She worked in a large department store in New York for many of those years.

Aunt Ethel had an amazing memory. She arrived in the United States as a 7 year old. Yet, when I asked her if she knew what ship she arrived on and when, she told me without hesitation. When I went looking for the ship manifest experts (this was pre-mega-databases on-line) told me the ship she names did not sail in that year and didn’t go into service until 10 years later.  My aunt was right, though, when I found her passenger list, it was on the ship she named and on the date she claimed to have arrived.

One day I was asking her about her husbands’ family, about whom I knew very little.  Since genealogists abhor data vacuums, I wanted to know. I told her that I couldn’t find the Needleman family anywhere.  She told me something that amazed those relatives who had known her far longer than I did. She said that her husband’s name wasn’t Needleman, it was Nudleman, but, aunt Ethel said, “what kind of name is that, so I told him it had to be changed!”

Silly me, I thought she meant that it was changed when they got married in 1928. Then I found the 1930 census under the name Nudleman, and other documents later than that all of which said Nudleman! I finally found out how she took care of it!  Sometime between 1930 and 1940 the shift was made by changing the “u” to “ee”. In 1940 the name that Ben, Ethel’s husband, gave to the enumerator was Needleman. Ethel took care of the rest – she took their marriage certificate and penciled in ee over the u! Their original marriage record was of course, untouched. Now, admittedly, the difference between the appearance between the two names isn’t great, but they sure do sound differently! 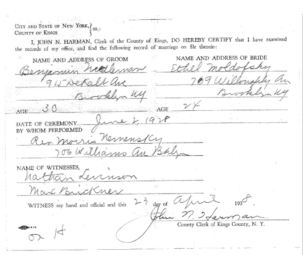