Posted on October 24, 2018 by Janette Silverman

What, you might ask is that jumble of letters? The Jewish Federation of North America has an annual conference called a General Assembly. Although it has been in Israel before, it’s previously only been in Jerusalem. I was last at a GA in Jerusalem in 2003, and was very excited to be at this year’s GA in Tel Aviv, with Lindsay Levine, who had been part of the team that did the epic Eastern European odyssey with me a couple of months ago. Lindsay was also with me in LA last fall at the GA.

I haven’t been taking many photos for the last few days since our focus has been in the exhibit hall where ancestryProGenealogists has a booth.  We’ve been taking cabs to the convention hall at the fair ground in Tel Aviv, the site of this year’s GA, since we need to be onsite by about 7:30 AM and it’s about 3.2 miles from our hotel. We did however, walk back in the late afternoon when the exhibit hall closed, at around 4:30 on Monday, and 4 on Tuesday.  Today, Netanyahu was speaking at the morning plenary, and we left a little after 10 . I had an appointment with the 92 year old aunt of a client in Ramat Gan, to interview her and see what memories she had of the family.

Mornings, before we leave for the conference, our hotel breakfast space overlooks the Mediterranean and the amazing beaches. Surfers are out as well as bicyclists, runners and volleyball enthusiasts, as soon as the sun rises.  At least that’s when I think they come out – the breakfast room opens at 6:30, just after sunrise and the tayellet and beach is already crowded by then!

I was thrilled to meet with past and present clients who are involved in their community’s Federation, and in Israel for the GA. Among those clients was Sue Schlichter. Sue and I have been working together for a while finding new information about her ancestors, and refining the information she already knew. 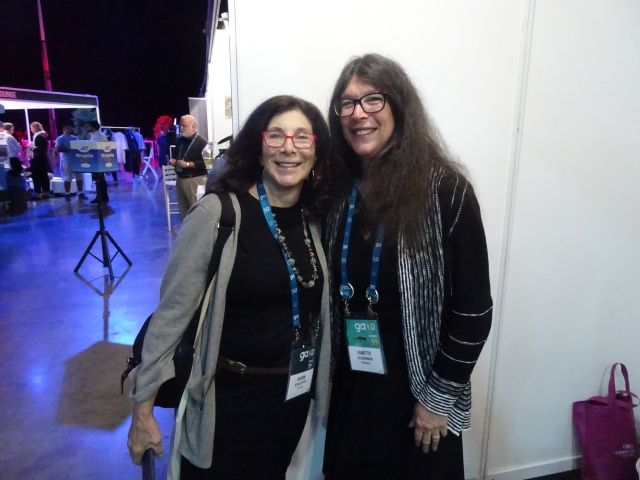 Tomorrow, Lindsay and I are off to the Central Zionist Archives in Jerusalem followed by a visit to Mount Herzl, and then late in the day, a ballet performance.

I received a message from a friend a little while ago telling me not to forget that daylight savings time ends this Sunday. That’s great – I really and truly appreciated this. I couldn’t have forgotten, since I had no idea it ended this weekend and we have a 9 AM appointment at an archive.  So glad we can get an extra hour of sleep!