There’s nothing like not permitting exhaustion hold you back from exploring. After all, it’s only sleep or the lack of it. However, on Friday, the Krakow archive was only open from 9 AM – 1 PM and we had things to do. So, bright and early we headed out to the archives which turned out to be located very close to our hotel.  Last year, we had about a 15 minute walk from our hotel, this year it was perhaps 5 minutes. 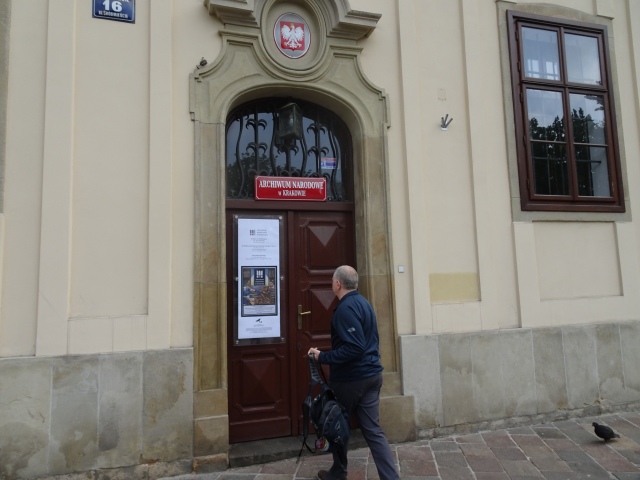 We arrived just before the reading room doors opened, and were among the first to secure spaces at the tables.  Marek made sure to get our paperwork processed quickly and we strategized, deciding to look at the indexes to the birth, marriages and deaths first, and to tackle to population lists afterwards.  We managed to get through the marriage indexes and to look through the books of marriage records, taking pictures of the pages we needed, and to get thorough the death indexes. We’ll have to get the death books when we return to Krakow at the end of May.  Four hours passed amazingly quickly.

As we headed out of the archives, we were stopped by a man who urgently needed to speak with us.  He must have overheard our conversation in the archives – he was from Rzeszow and is a professor who specialized in the history of the Jews.  I asked him if he was Jewish, and told me that his mother always insisted that he not be.  His mother was Jewish and his father was not.  We talked for quite a while, and then all went to lunch.  He insisted that we eat at a Ukrainian restaurant – Smak Ukrainski.

Lunch was delicious. I had a pancake with potatoes and cabbage – it was more like a knish than a pancake, but it was wonderful. The conversation was great – we had an opportunity to find out lots of details we didn’t already know about some of the very small towns we will be driving through, and we will probably stop (which we hadn’t originally planned to do) to see some of these sights.

Marek and I headed off to Kazimierz to take photos of the buildings in which a client’s ancestral family lived prior to immigration. We had dates from 1910-1944 from population lists and death records. We found 4 of the 6 buildings, the last ones are in Krakow.  We walked over 16,00 steps and decided enough was enough.  Unfortunately, Marek and I love what we do and when we returned to the hotel, we sat down to quickly go over a few small details, and at 10 PM, we realized how late it was and that we were hungry (no dinner). We found a shop that sells pastry and  settled on freshly made waffles and ice cream.  Terrific meal!

I am however, looking forward to eating at a kosher restaurant in Kazimierz on Sunday night.

Last summer, Lina really wanted to go on a carriage ride in Krakow.When I saw a horse and carriage come by, I had to take a photo for her!

Now, catching up on some of the sleep I’ve been missing for the last few days seems to be imperative!