The morning began with (for me) a very unusual Sunday morning activity.  We went to Mass at the Cathedral.  Of course, I couldn’t follow a thing. We’re in Poland, and the Mass was in Polish. The Cathedral is very ornate and perhaps next week when we return and there is no Mass going on, I’ll stop in and take some picture.  Although others were taking photos during the Mass I didn’t feel comfortable.  The Cathedral was mobbed and this was only one of 7 during the day. Today was first communion, and little girls were all over the streets in their pristine dresses.  For the first time ever, I saw a little boy in white robes – I’d never thought about what the boys would wear that was the equivalent of the girls’ special outfits. 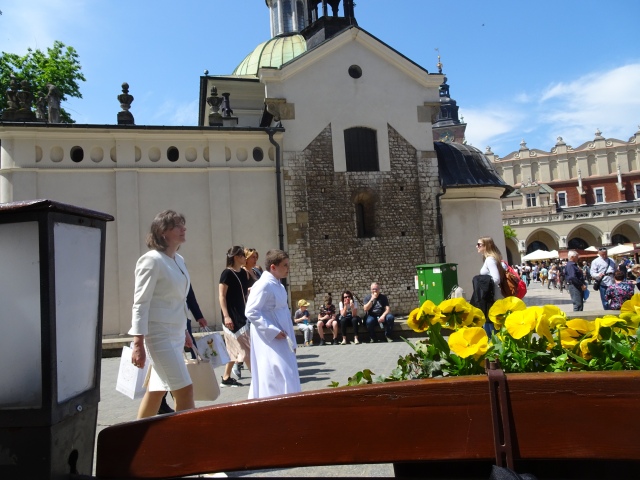 We also saw a bride and groom outside the Cathedral.

We walked around the craft market for a while and then went in search of the perfect pierogi. Marek stopped someone on the street and asked them where the best place was in Kraków and they recommended Gospoda Koko.  Perfect choice – and the restaurant was nice a very quirky. We ate downstairs in what was probably a food storage cellar a long time ago.

While we were inside, it had stormed outside, and the streets were quite wet, the sun wasn’t very strong, and we were chilly. We headed back to the hotel to change our clothes and head off to Kazimierz.  We wandered around, slowly making our way out of Kraków to the old Jewish quarter. I was very excited about the thought of trying this kosher restaurant which I couldn’t find last summer.  We enjoyed a wonderful and relaxing meal during which a thunderstorm happened.  Somehow we missed two storms today!  The food at Zelig’s was really great. I wondered why we hadn’t found it last summer, so I asked how long it had been open – only two months! 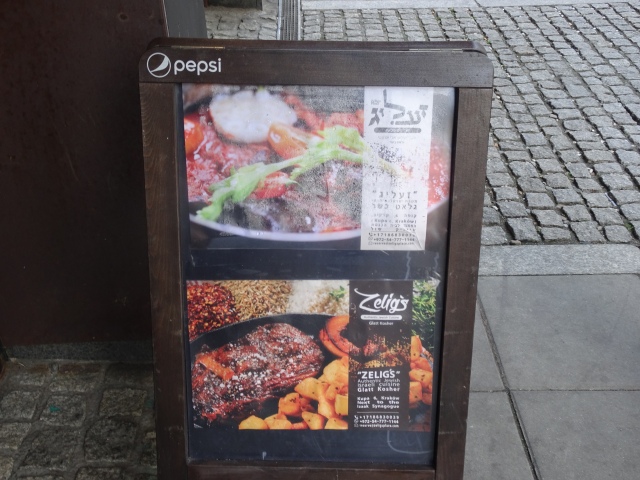 We leave early tomorrow morning for Jawornik Polski and Widaczów (also known as Bidaczów) to do research in civil and church archives.