Some days seem to blend together. Some days I can’t seem to separate from the day before or after.  These two days, seemed to be like one very long inseparable time.  Perhaps it’s best if I start with the food. Meals I can separate. Two very memorable courses from two distinct restaurants – Literatka Restaurant in Stare Miasto was the site of several pleasant dinners and lunches this trip. Particularly worth noting was the asparagus appetizer.  Dinner on the 19 was at the ever-memorable Red Pig.  Great ambiance and a good touch to the end of these two days. Marek said that with dessert I needed to have a glass of a cherry liquor.  It’s really a vodka-cherry-rum liquor, and went perfectly with the chocolate shell filled with berries and something wonderful whose name and ingredients I don’t know!

Warsaw, like so much of Eastern Europe evokes a very strong emotional response from me.  There’s a tension between the old and the new, between what I know of the history and the contrast between that and what I think I’m seeing. Then, there’s the tension between the medieval history and the relatively modern history. My head feels like it’s spinning. It’s difficult to grasp how all of these realities can possibly exist in one physical space. By the way, to answer those of you who have asked if I have personally seen any anti-Semitic acts or heard any slurs – I have not. I feel guarded because I know that there is probably something just beneath the surface, but perhaps because I am with safe people, I find myself relaxing that guard.

Earlier today, when visiting one of the remnants of the Warsaw Ghetto wall, I met a family of Israelis.  Their ancestors were from all over Poland, Lithuania and Ukraine. They knew that one of their ancestors was in the ghetto and they don’t know where he died. Why is knowing the place of a person’s death or burial so important? Why is knowing how and when they died so haunting? I don’t need answers – there are no real answers to these and so many other questions that this place evokes. There is pain, there are tears. All around are the remains of what was here prior to the war, what survived, what was rebuilt, and what was left to disintegrate. Plaques everywhere commemorate spaces where Jews once lived and where they were murdered. Plaques commemorate the bravery of Jew and non-Jew attempting to fight off something they battled against. They lost, but didn’t loose. Ultimately of course the war ended. There is still a Jewish people. One of the really difficult things I grapple with is the size of the Jewish population in the cities and towns – everywhere we go – this restaurant, that building, a shop, a school, an office, a factory, a theater, a hospital, a dormitory – all owned and operated by Jews.  The percentages of the population that were Jewish in so many of these towns is astounding – the memories lay like ghosts, I feel like I’m walking through a hologram.  Of course, the good side of all of this, if there is a good side, is that we עם ישראל the people of Israel, the remnant of Israel שארית ישראל  are still here, walking the earth, still doing good, and by much of the work so many of us are doing, restoring the memory of those we lost.

Perhaps the above explains why these two days were one long day. 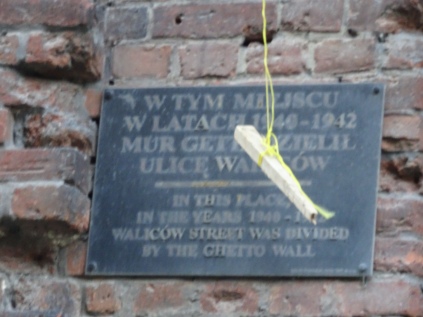 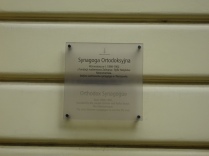